The Karrinyup house was a rental and the client wanted to update the kitchen to make it more appealing, without spending a lot. Originally, she wanted to change the bench top and then decided to change the doors as well.

Her biggest issue was getting a contractor to do what she wanted, most would say “rip it all out, its better!”

It is easier for us to rip it all out and start new but it’s important to listen to what the customer wants!

The original bench top was only 450mm deep, much narrower than tops today and it was thought that she would have to use the old sink. With a bit of investigation, we were able to source a new and modern sink that had been made for renovations like this one. The new bench top is 20mm engineered stone and we were able to add a breakfast bar, which increases useable bench space.

We used my favourite 600mm white gloss tiles as a backsplash 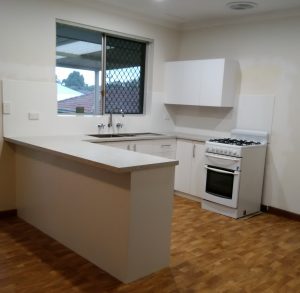 which reduces the grout lines giving a clean and sleek finish. While tiling we levelled the windowsill which modernises an old window. New doors, handles, taps, power points and light switches completed the look.

One Reply to “Karrinyup Is Now Tennant Ready”

Is to help you create the property of your dreams..